Blue Star Sapphire are a rare and beautiful type of sapphire. The star which shines upon its surface is an asterism, which gives the stone a six-rayed star when viewed under light. Under a direct light source while tilting and rotating the stone is the best way to see the star shine.

You can find star sapphires in a range of colors, from various tones and hues of blue to pink, orange, and even black. The more vivid and intense blue the stone is, the more desirable it is. Most star sapphires show a white star, however there is an example from Thailand gems with a gold colored star.

Sapphires are related to rubies, as both are members of the corundum family. Corundum stones have a hardness rating of 9, placing it second only behind diamonds on the hardness scale. The word corundum derives from the Sanskrit word ‘kuruvindam’ which meant ‘ruby sapphire’. The term sapphire however was derived from the word ‘safir’ which itself has its origins in the Greek word for ‘blue’. 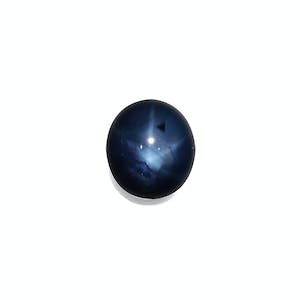 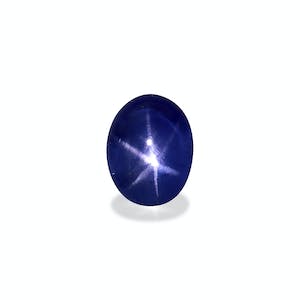 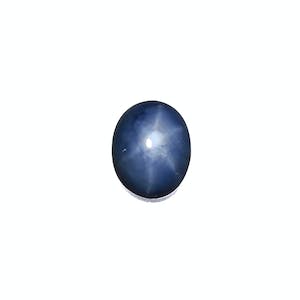 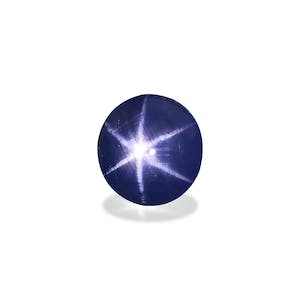 Blue Star sapphire are generally cut as cabochons with high domes to maximize the star effect. The highest quality cabochons are slight transparent to translucent clarity with smooth dome surfaces showing good symmetry. When looking for quality stones, you should look for an even roundness in the shape. You may find gems with uneven tops or bottom, this is necessary in many cases for proper orientation, in order to display the best star. 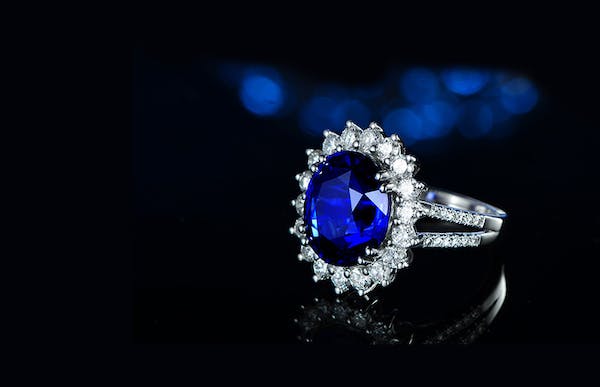 September Birthstone : Sapphire and the stone of Taurus on the zodiac chart. However, if you are seeking a talisman, the star sapphire is believed to have more reputed mystical powers than normal sapphires.

World famous explorer Sir Richard Francis Burton traveled the Orient while wearing a large star sapphire called Asteria. He claimed the stone brought him much luck, as the fame of the stone preceded him during his voyages. Many held the belief that by merely seeing the talisman stone was good fortune. This brought Sir Burton extra favors and excellent service from the people he visited. He was aware of the gemstones fame and would repay them with the privilege of viewing his talisman.

Christians in the past referred to the gemstone as the ‘stone of destiny’. The strongly associated the three crossbars in the stones star as Faith, Destiny and Hope, as corundum star stones have three crossbars and sex rays, meanwhile garnet stars have two crossbars and four rays. These talismans were used as traveler’s guides, as Sir Burton did, and as protection from bad omens and illness. The gemstone was believed to ward off the Evil Eye and capable of scaring away devils. strong believers even believed the stone kept its powers even after it has left the wearer’s possession.

Abbes Hildegard von Bingen (1098-1179) wrote about the healing powers of gemstones in Physica. According to her, gemstones are formed via the combination of fire and water, and thus, hold the powers of those elements. She further believed that each individual stone had a divine blessing from God. This is what she had to say about sapphire:

“who is full and would like to be clever, should, in a sober stare, frequently lick with the tongue on a sapphire, because the gemstone’s warmth and power, combined with the saliva’s moisture, will expel the harmful juices that affect the intellect. Thus, the man will attain good intellect”.

So, it is clear that sapphires were also believed to bring intelligence to a wearer who treasured the gemstone in their possession.

4Caring for YouR Star Sapphire

Because of the Blue Star Sapphire hardness and durability they are considered one of the toughest gemstones on earth. It is only slightly softer than diamonds, but lacks cleavage which makes it resistant to damage. Fracture-filled stones are not as durable as untreated Blue Star Sapphire. Re-cutting or re-polishing a star sapphire that has been fracture-filled is not recommended. Even beryllium diffused gemstones will require care depending on the quality of the diffusing job. Star sapphires can be brittle stones, and thus, appropriate care should be taken during any re-cutting and during setting.

Clean you star sapphire with warm soapy water and a soft cloth. Avoid ultrasonic cleaners and steamers, especially if you have a fracture-filled stone. The vibrations and heat can damage the gem.

Remove any sat sapphire jewelry before exercising and cleaning to avoid getting it in contact with any harsh chemicals. Store them separately or covered to avoid scratches from other gemstones. We recommend wrapping them in a soft cloth and storing them in a fabric-lined box.