Find the peace and calm of the ocean in Aquamarine. Let’s learn more about this amazing gemstone. Its name comes from Latin, Aqua, water, and Marina for sea. It was named this because it was believed to be the stone of Neptune, God of the Sea. For this reason, and many more that we will have a look at here, it has been used in jewellery since around 500 B.C. Sailors believed it to be mermaid’s treasure and wore the gem to prevent shipwrecks and avoid sea-sickness. Mined mostly in Brazil, but also found in Africa too, there are many reasons to wear this intriguing stone this Festive Season.

1A colour as striking as the ocean itself

Aquamarine gets its beautiful blue like colour from the presence of two irons in its composition: Ferrous and Ferric. Ferrous gives the stone the blue, characteristic colour, whilst Ferric adds very faint green tones. Just like the colours of the sea. In its natural state, the Ferric is visible, giving the stone a more greenish blue colour. Through heat treatment, the ferric iron is turned into ferrous iron, and thus loses the green hints. However, Aquamarine is one of the only gemstones that can be found with near perfect clarity. But for it to be considered, it must be “eye flawless” meaning no visible impurities.

The darker the shade of blue, the more demanded the stone becomes. And its value also increases. Although, its beautiful colours are unique and thanks to its amazing transparency it has a dazzling sparkle. This sparkle means Aquamarine can be a great substitute for Diamonds. With a more accentuated colour, but just as bright, you would light up any party wearing Aquamarine earrings. 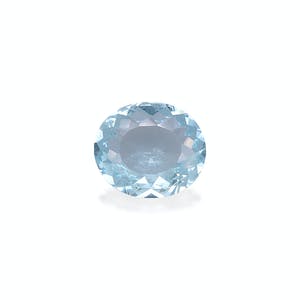 2A stone of myth and legend

As mentioned earlier on in the article, Aquamarine Gemstone is a stone surrounded and draped in myth and legends dating back to Roman times. It was believe to help prolong relationships and was given as anniversary gifts, before become the gift of the 19th year anniversary that we know it today. But its powers didn’t stop there. It was believed that the stone would help soldiers in battle, making them invincible! Today, it is believed to help in legal battles.

Furthermore, and as you would imagine, a lot of the gemstone’s powers are linked back to water and the ocean. If the power of your stone was becoming weak, then you should leave it in water in the light of the moon to recharge it. This is one of the beliefs behind the stone. All these myths and legends stem from the belief that the stone becomes more powerful underwater.

Whether you chose Aquamarine this festive season for its beauty, unique colours and dazzling shine. Or because of the myths and legends surrounding it. Maybe you are most at peace near the ocean and want to carry it with you at all times. All these reasons and so many more are what make Aquamarine the stone to wear this winter.