Just over a decade ago, in 2009, African Rubies deposit was discovered in Montepuez, Mozambique. Since its discovery, the rubies from the mine have become some of the most valuable gemstones on the market and show no signs of slowing down. While Burma rubies are the most famous of stones, especially ‘pigeon blood’ rubies, the mines in that area are depleting. What’s more, the gems found in Mozambique are larger than their Asian cousins and don’t require heat treatments in many cases. 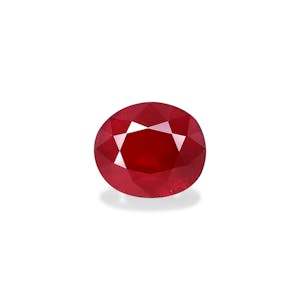 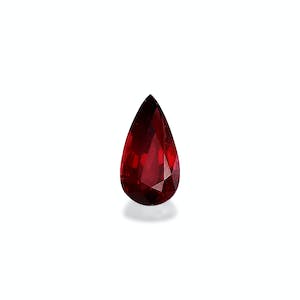 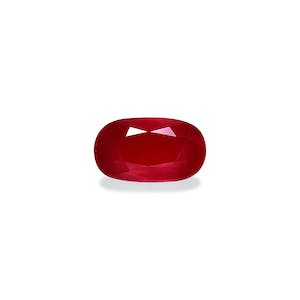 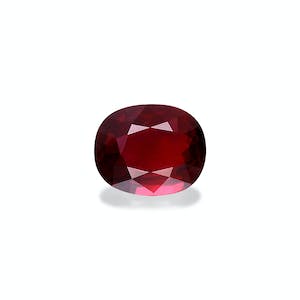 While size and quality might be a good reason for the increase in value of the Mozambique stones, there are other reasons such as the increased demand for colored stones and the ethical mining that is done at the site in Montepuez. 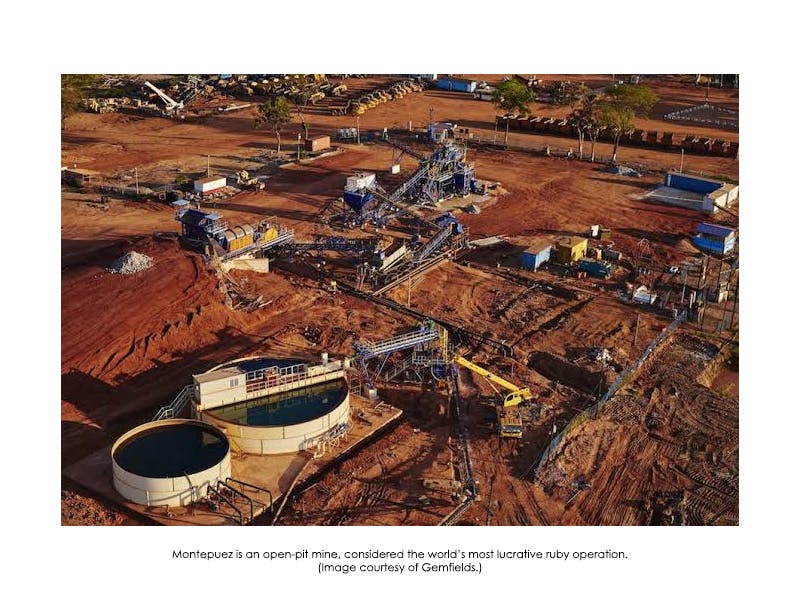 Montepuez was not the first ruby deposit discovered in the country of Mozambique, however, it was the first which was not on a national reserve. While the other two, M’sawize and Ruambeze, were on national parks and saw illegal and artisanal mining, Montepuez had an opportunity to be different.

Of course, there was illegal mining during the early stages, but Gemfields soon took over and has overlooked the project ever since. They have collected data both on site and in labs to ensure the quality of the stones. Furthermore, they have provided the site with ethical and legal mining that is giving back to the community. As with their take over came investors wanting to invest in a new and upcoming gemstone in the market.

In 2014, Gemfields held the first African ruby auction in Singapore. Buyers were astonished by the collections of Mozambique Rubies, classified in pre-graded lots based on color and quality. The quantity of these lots meant that buyers could by a suite of similar color and quality in one purchase, instead of waiting years. This changed the ruby market and Gemfields now hold two annual auctions in Singapore. Please also follow the chart below where the prices of ruby value per carat has also had a steady rise in the coming years at the Gemfields auctions.

We, Star Lanka are also committed in ethical mining practice. We are also one of the few Gemfields authorized auction partner. 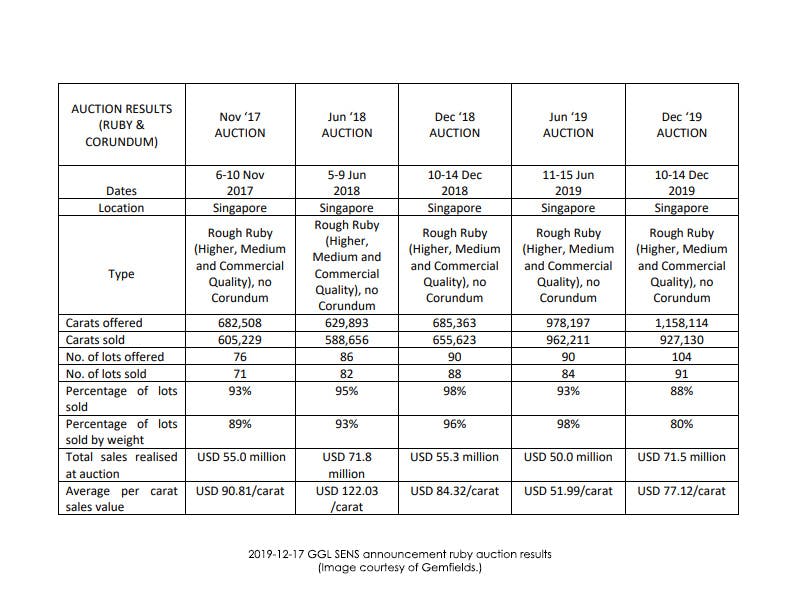 For centuries, the ruby market as been dominated by two main sources: Sri-Lank and Myanmar, especially the Mogok area. It was these two countries that have dominated the market since their discovery many centuries ago. Throughout the 1800’s until the 1990’s, there were mines in the borders between Thailand and Cambodia that produced high-quality rubies, which were very sought after during the 1960’s. These are the most historical and ancient deposits known.

In the last few decades, several other deposits have been discovered. Mostly importantly the Mong Hsu deposit in Myanmar, which was discovered during the 1990’s, and was the largest source of volume for rubies until the discovery of Montepuez.

The Mozambique deposit has brought something new and different to the market. Not only in terms of volume, but also in size. Huge untreated rubies are being found with amazing colors, which have caused an unimaginable impact. This deposit has opened up the availability of the gemstone in all sizes and colors.

What we need to remember is that stones are not perishable goods, thus, every stone ever auctioned from any mine is still in existence. The deposits in Myanmar may have thousands of years head start on Montepuez, but that also means depleting mines. Major trade shows are seeing the same volume being offered of Burma and Mozambique rubies, with the balance often tipping in favor of the African stone. 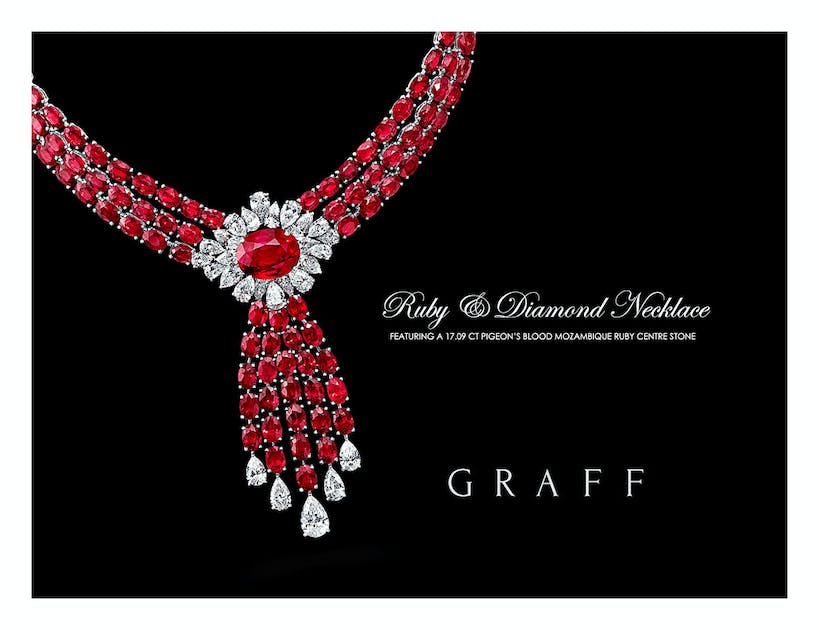 Graff Jewellery are some of the leading Fine Jewelry who have seen the potential in Mozambique Ruby. These gemstones have not yet come to the spoitlight of International Auction houses such as Sotheby’s or Christie’s, but when they do you can expect prices to sky rocket exponentially.

Natural colored gemstone type have seen a huge rise in the last decade or so. This can be attributed to celebrities, such as Meghan Markle’s aquamarine gemstone engagement ring or more well-known, The Duchess of Cambridge’s sapphire engagement ring, previously worn by Princess Diana. It can also be the transparent valuation standards new in place, alongside ethical and institutional gemology labs and active market transactions. We say it is the combination of both reasons that have seen the value of colored gemstones grow.

It might come as a surprise to discover that emeralds and rubies (Mozambique rubies in particular) are now more valuable, carat per carat, than colorless diamonds, and it won’t be long until sapphires are able to overtake diamonds too.

With a new awareness about natural stones and the transparence offered by companies such as Gemfields, collectors and average customers alike are stepping away from synthetic stones (which were a huge rival for many years) and opting for a natural, ethically sources colored stone instead. This is where the African Rubies as an advantage, as it is overlooked completely by Gemfields, the leader in ethical gemstone sources.

When a global demand increases, so does the price of the product. The trend for colored gemstones doesn’t look to stop, thus, the price for high quality rubies is going to get higher with every auction.

What Does the Future Hold?

Consumers are becoming braver with their choices, and color has never been such a staple as it is in modern society. Furthermore, some Asian countries, such as China, see the color red as a good luck color. Experts expect this demand for colored stones to continue growing for many years into the future, and with it, the price and value of Mozambique rubies as Ruby hardness is close to that of diamond at 9.0

As older, more well-known deposits come to an end, Montepuez still has much to offer. Unless more deposits are discovered, it is not an impossible thought to believe the African mine can take over the market.

It will also come as a relief to know that synthetic stones will never replace natural, high-quality gemstones, experts believe. Natural gemstones such as these African Rubies are here to stay and will be around for many years to come.

It is clear to see that because of the rising demand in high-quality, natural colored gemstones, accompanied by the vast amount of volume Montepuez creates, Mozambique rubies are a must invest for this upcoming decade. The stones have had a decade to establish themselves on the world market and have done so in a way nobody expected.

If you are an owner of a Mozambique ruby, hold it tight as prices are expected to rise. If you want to be a proud owner of an African Ruby, purchase one now before the market raises their value.